What Came Before
Inspires What
Happens Now

How an iconic Baltimore tower
became the most exciting residential
rental building in the city.

...was a bustling commercial district in pre-WWII Baltimore but fell on hard times in the post-war years. When the historic O’Neil’s department store—once considered the Saks Fifth Avenue of Baltimore—announced it was closing, city leaders sprang into action.

In the 1950's, Baltimore officials put together an ambitious, 33-block redevelopment plan designed to revitalize the area between Charles, Liberty, Saratoga and Lombard streets. The goal was to connect the busy financial district to the south and east to the still-robust commercial district along Howard Street to the west. Numerous naysayers said it couldn’t be done, that Baltimore was past its prime. But city leaders and their business partners proved them wrong.

In the years that followed the completion of Charles Center, Baltimore continued its downtown revitalization. The Inner Harbor quickly followed and, later, Harbor East rose, too. If not for the vision and energy that went into Charles Center, the Baltimore of today—and tomorrow—would look much less grand. 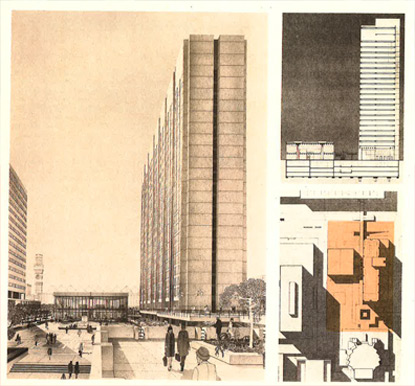 ...is an important part of the Charles Center development, representing some of the finest architectural work in the neighborhood. It was designed by Baltimore firm Peterson and Brickbauer, who employed the aesthetics of Brutalism to create a building that rejected useless ornamentation for a commitment to space and function.

Completed in 1969, 2 Hopkins Plaza became the home of Mercantile Bank and Trust, and many began to refer to the building by the name of its tenant. For more than a generation, bankers came and went from the Mercantile Bank and Trust building, enjoying its gorgeous lobby and stunning views from the offices. When PNC Financial Group acquired Mercantile in 2007, it initially took over the lease, but decided to leave the building a few years later. This move opened a whole new opportunity.

After years of careful work, 2 Hopkins Plaza is now 2Hopkins apartments, a brand new residence inspired by this city’s long history of boldness and optimism. It represents the best of what this city has been. And the best of what it will become.